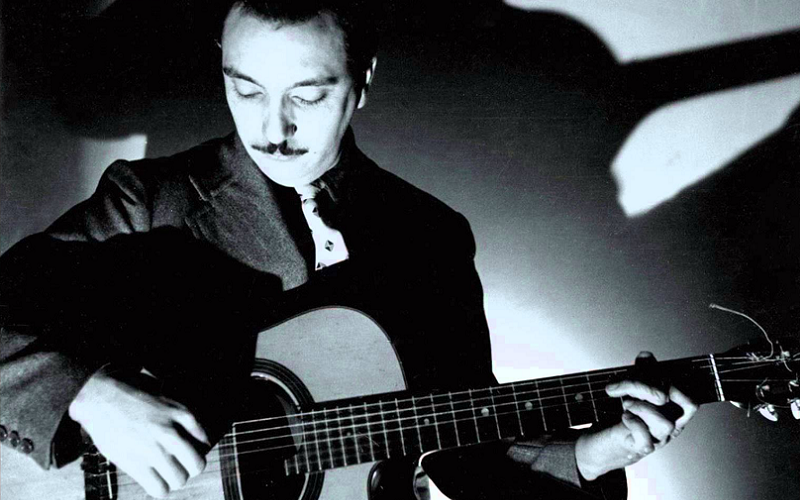 The Lasting Impact of Django Reinhardt

Just as visual art has its movements — Bauhaus, Dada, Art Nouveau, Art Deco, Cubism — the guitar has its own stylistic schools. Every player approaches the instrument slightly differently, but every so often there is a player or group of players who deviate far enough from precedent to create their own aesthetic.

When the invention of new technique for the sake of novelty is contrived, it’s obvious. At best, those players are regarded as eccentric outliers. At worst, their playing is dismissed as gimmicky and inauthentic.

But when the approach comes from the musical environment a player grew up in and the way they interpret those influences, it resonates. If it’s compelling and unique enough, imitation follows. An inflection point in the history of the instrument is born.

Merle Travis and later Chet Atkins built a legion of acolytes around their alternating bass, thumb–picked style. Doc Watson and Clarence White paved the way for nearly all lead flatpickers out there. Charlie Christian showed us how the guitar could work as a lead in jazz. The electric blues — or electric guitar playing in general — was never the same after Hendrix.

Those players brought new techniques and vocabulary to the instrument, but it would be hard to make the argument that any of them single-handedly invented an entirely new type of folk music, with its own template of instrumentation and its own canon of songs. Django Reinhardt did just that.

Some people call it gypsy jazz. Some prefer to call it jazz manouche. Stephane Wrembel, one of the leading contemporary players in the style, simply calls it “Django’s music.” Labels aside, everyone knows it when they hear it: the syncopated rhythm chops on acoustic guitar, the singable, swinging melodies, the fiery solo flourishes and fills. And many musicians of today want to learn it.

Plenty has been written about the details of Reinhardt’s life, including the 1928 caravan fire that left his fretting-hand scarred, leaving only two independently articulate fingers. Instead, here’s a look at the specific things that set Django’s music apart and how it still inspires musicians today.

In the early 1930s, American jazz music arrived in France. Discovering the likes of Duke Ellington and Louis Armstrong, Reinhardt would devote himself to dissecting their repertoire of jazz standards by ear, striving to replicate Armstrong’s trumpet as much as the Romani musicians from whom he learned as a child.

Unlike the jazz acts from across the pond that captured Reinhardt’s imagination, the Hot Club’s rhythm section lacked a drummer. The band would develop a forceful, percussive rhythmic style known as “la pompe,” best characterized as a syncopated quarter note beat, in order to keep time at increasingly fast tempos.

Also lacking a horn section, the all-string quintet would rely on Grappelli’s violin and Reinhardt’s Selmer guitar to carry the melody, bringing the guitar to the forefront of the mix as not only a rhythm instrument (as it was approached as the time) but an instrument capable of breathtakingly complex and melodic leads.

As the Hot Club’s notoriety grew, so did Reinhardt’s collaborative spirit. Prior to the outbreak of World War II, the quintet would gain the attention of jazz acts across the United States, including the likes of Brooklyn-born vocalist Adelaide Hall. In 1935, she opened a club in Paris called “La Grosse Pomme” where the Hot Club was a featured house band.

This added recognition surely didn’t hurt when saxophone legends Coleman Hawkins or Benny Carter rolled through town. In fact, it served as an invitation to collaborate. Hawkins would record a number of songs with the Hot Club’s members (“Stardust” is a seminal recording featuring Hawkins, Reinhardt and Grappelli), while recordings such as “I’m Coming Virginia” feature Reinhardt and Carter in a live setting.

During the 1930s, jazz musicians on both sides of the pond were fully entrenched in the swing era, still a few years away from embracing bebop’s blistering tempos and emphasis on technique. And Reinhardt was no stranger to France’s popular music of the time. Some of Reinhardt’s earliest recordings, such as Maurice Alexander’s “Deception d’Amour” and “Parisette,” feature Reinhardt on banjo and primarily consist of one-steps and waltzes.

By the mid–1930s, Reinhardt’s Hot Club had developed a reputation for playing technically and harmonically complex music at tempos yet to be reached by Ellington, Armstrong, Eddie Lang (the “Father of Jazz Guitar”), and the American jazz musicians who changed Reinhardt and violinist Stephane Grappelli’s approach to composition.

One of the biggest reasons Reinhardt and the Hot Club played at such speeds was born out of a simple necessity: to get gigs.

In order to thrive as working musicians in France, Reinhardt and the Hot Club (along with other prominent jazz manouche musicians, like the Ferret brothers) would assimilate the era’s popular music into their own repertoire. As a result, the swinging Musette–style waltz remained a prominent aspect of the jazz manouche genre, serving both as a template and a catalyst for Reinhardt’s complex improvisational technique.