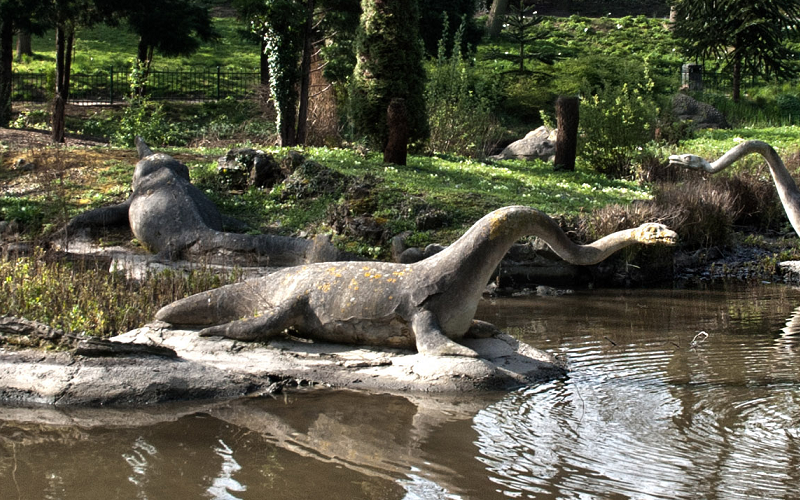 Art Rather Than Science Responsible for These Dinosaur Reconstructions

A century and a half ago, Britain was swept by dino-mania. The discoveries of ancient fossils and the first characterisations of dinosaur species, combined with new scientific theories that posited that the Earth was far older than previously thought, fuelled a fascination with all things ancient.

A concrete example of this period is still visible today, in the form of the dinosaur statues in Crystal Palace Park. These date to 1854 and were built for the reopening of the Crystal Palace in Sydenham, when it was rebuilt there following the 1851 Great Exhibition in Hyde Park

A naïve view of these is that they are a quaint, even amusing, example of how ignorant the Victorian scientists were – the statues predate Darwin’s theory of evolution by five years, and in some cases they bear little resemblance to the animals they claim to represent.

Joe Cain (professor of history and philosophy of biology in UCL Science and Technology Studies) has studied the statues’ history and says that naïve view is nonsense. The scientific origins of these statues is far more nuanced and interesting – and in any case, the credit for them lies with the sculptor, Benjamin Waterhouse Hawkins, far more than it does with the zoologist Richard Owen, who supposedly directed their design.

Hawkins was a scientific illustrator, an experienced translator of scientific ideas. Owen was just one of several sources he consulted, and Hawkins kept up with the rapidly expanding literature of the animals he was working to model for his displays. Hawkins even represented competing theories of reconstruction in his statues. There are two Iguanodon statues, for instance. One is long, low and lizard-like; the other is stocky and raised on its four legs, more like a hippopotamus or rhinoceros.

There is plenty to show that the artist wasn’t merely doing what he was told, but was actively interpreting the scientific evidence.

There also is plenty that science didn’t (or, couldn’t) tell him. Even more than today, the Victorians had only partial specimens, made of various bones of various origins and in various conditions, leaving Hawkins to fill very large gaps. On top of this, Hawkins had to invent elements such as pose, movement, and facial expressions. None of these could be gleaned even from perfectly preserved and well-understood fossils as pointed out at iflscience.com.

Given the uncertain (and disputed) scientific theories, the limited selection of fossils to work from, and the inevitable necessity of artistic licence, Cain thinks the dinosaur statues are something to admire rather than ridicule.

Cain’s interpretation of how the Crystal Palace Dinosaurs came about rings very true to me. In a previous life I worked with some of the people who prepare scientific visualisations, animations and artists’ impressions for the Hubble Space Telescope. The case of HD 189733b – a planet that was observed being scorched by a stellar flare (among other research) – is remarkably similar to the dinosaurs of Crystal Palace.

Much like Benjamin Waterhouse Hawkins, those animators had a great deal of scientific information they could draw on – on the size and brightness of the flare, on the optical properties of the atmosphere, on the colour of the star and its appearance. But as with the Crystal Palace Dinosaurs, these were just pieces of a puzzle, with plenty missing and some educated guesswork involved in putting them together.